I’ve always thought that one of the purposes of design was to solve a creative problem. Whether making a textile design work with minimal color, defining a brand through the use of a mark and color, or in this case cycle designs that are beautiful, practical and safe. Being an avid cyclist, seeing a design for a new bicycle always catches my eye and this entry for the Seoul Design Foundation contest was something that made me say, “wow”. Not only do we see a functional problem solved with the ability to fold the bike closed, but the beauty of the lines is evident in both the compact package and the fully extended bike. END_OF_DOCUMENT_TOKEN_TO_BE_REPLACED 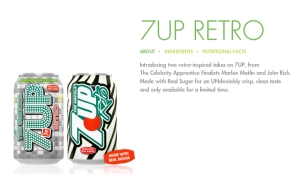 7UP became a major brand of soft drink in 1967 after it was marketed with the tag “the uncola” to differentiate it from Coke. Adverts used a Beatles-esque Yellow Submarine-look, to suggest that 7UP was fun, quirky, psychedelic, and in tune with the era. The campaign also suggested that the slightly wild experience was a natural one. The bright, clean colors were, notably, a striking contrast to Coke’s dark brown-black. I mean, would you want to steer a submarine through water that color? Nor would we. It’s unspoken, but the advert suggested that 7UP’s major rival was out of date and unhealthy.