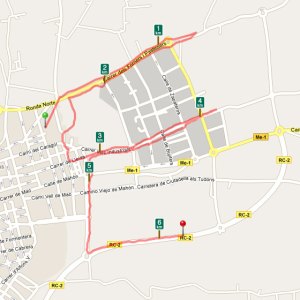 I never thought of typography design as a physically taxing endeavor. It is for Joan Pons Moll, a graphic designer and recent running enthusiast living on the island of Minorca, which is off the coast of Spain. Joan is in the midst of Running Alphabet, a project that combines typography and running to design a new typeface.

He’s traded in his tablet pen for sneakers, and plans to create a new typeface with them. Using the GPS based app, RunKeeper, Joan tracks his runs, each one following a route that eventually traces out the complete form of one letter of the alphabet. His mission is to complete all of the letters of the alphabet, upper case and lower case. He’s interested in contributors, so if you’re a runner, give him a H.O.L.L.E.R.