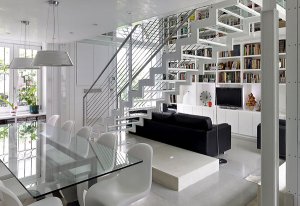 “My former apartment was in a typical 15th-century Venetian palace,” says Marco Agostini, the Director General of the City of Venice. Agostini, 51, told the New York Times recently,  “even though I live[d] alone, the rooms were too small and the windows allowed little light in. Quite frankly the whole place clashed with my modern furniture.”

In a city that embodies old Europe like no other, Agostini loves modern design — including modern houses, of which there are few in Venice. In 2006 he was left a ruined two-story, 17th-century house by his uncle Giuseppe Boccanegra, a pianist and professor of music.

The interior had been gutted for Boccanegra’s boats. But, for Agostini, this turned out to be a plus. In accordance with Venetian planning regulation, he had to preserve the outer walls (of gray trachite stone). The lead architect, Filippo Caprioglio designed a glass interior, describing the new design as “basically a box within a box,” and says the glass interior embodies the “simplicity and lightness of modern design.”

1 thought on “Interior design Venice: a house of glass in a shell of stone”