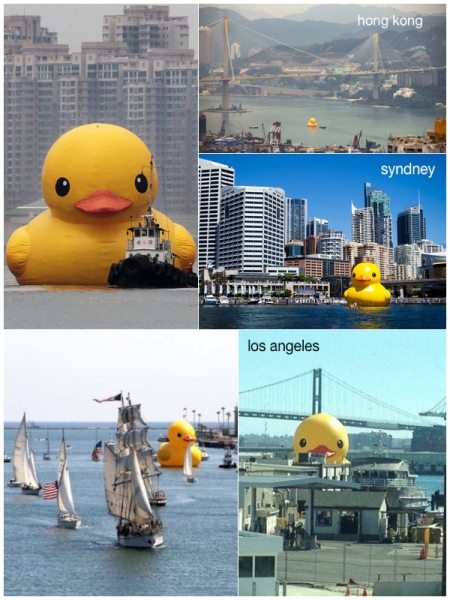 Today is National Rubber Ducky Day! In 1970, Jim Henson performed the song “Rubber Duckie” as Ernie on Sesame Street, and the rubber duck bath toy has been an iconic American symbol ever since. Rubber ducks have been around since the rise of the rubber industry in the late 1800s, but no one knows their exact origin.

Look at these wonderful images… they’re not photoshopped! That is an actual 85 foot tall rubber duck! Florentijn Hofman is an internationally renown artist from the Netherlands who sculpts huge pieces usually of every day objects, sometimes WITH everyday objects.

His Rubber Duck has traveled the world popping up in cities from Sao Paulo to Auckland, Hong, Sydney and even in Los Angeles for their Tall Ships Festival. How funny is that duck peering over buildings?!

Hofman loves including the public to be involved and they cause passers by to stop and smile. “They give people a break from their daily routines,” he says. “Passers-by stop in front of them, get off their bicycle and enter into conversation with other spectators. People are making contact with each other again. That is the effect of my sculptures in the public domain.”